Check here periodically for news and information about the industry and our company.

December 27, 2022 - Parkway is pleased to announce the acquisition of a 90,000 square foot, 306 parking space property in the Arts District of Tulsa, Oklahoma. The location is in close proximity to the Tulsa Theater, Cain’s Ballroom, the BOK Center, Guthrie Green, and numerous bars, restaurants, museums, apartment, and office buildings. We are excited to add another high-quality parking asset in a new market.

We continue to look for surface parking acquisitions across the country. Reach out to our acquisitions team (acquisitions@parkwaycorp.com) to discuss opportunities.

December 16, 2022 – Parkway is pleased to announce the development of a state-of-the-art building to be constructed at 2000 Arch Street. Designed by L2P/Stantec with the highest standards for sustainability, the new 18-floor, 550,000-square-foot structure will be occupied by Chubb, the world's largest publicly traded property and casualty insurance company. Construction will be managed by Turner Construction and will commence in February 2023.

The project will create at least 1,250 new positions in Philadelphia following the building’s opening in early 2026, making it Chubb’s largest office in North America. Chubb has committed to creating and retaining a total of 3,200 jobs in Pennsylvania within five years following the opening. During the construction phase, the project will also support hundreds of jobs from local unions.

This development will expand Chubb’s workforce in Philadelphia and will include new roles in digital technology, finance, underwriting, and claims. The proximity of the new location to the city’s leading colleges and universities will provide an important pipeline of new talent. There will also be hires into Chubb’s newly launched apprentice program, which will offer roles for individuals without a four-year college degree in areas such as claims, underwriting, and technology.

"It has been a fantastic experience collaborating on this project with Chubb, which, like Parkway, has strong roots here in Philadelphia,” said Robert Zuritsky, President and CEO of Parkway Corporation. “For nearly a century, Parkway has spearheaded some of the most significant and transformative developments in Philadelphia's history. We're thrilled to bring this development with its positive economic impact and job opportunities to this vibrant neighborhood and we look forward to working with our partners to build the future of this world-class city."

2000 Arch Street will be LEED platinum certified and is expected to be open in early 2026.

November 10, 2022 - Parkway Corporation is proud to continue to find ways to create destinations in Philadelphia. We have are proposing a 31-story luxury apartment tower in Center City on our 21st & Ludlow lot. We look forward to the opportunity to serve the community, create jobs, and expand the City’s skyline. More to come!

September 1, 2022 - Philadelphia-based Parkway Corporation, a leading parking operator and real estate development and investment company, announced today that it has recently completed the formation of Parkway U.S. Land Carry Fund I, LP. The fund was capitalized to acquire more than $100 million of surface parking lot assets in the United States.

August 5, 2022 - Parkway is pleased to announce the acquisition of a 3.6+ acre property near Raymond James Stadium in Tampa, Florida. We are excited to add another high-quality parking asset in a top market.

We continue to look for surface parking acquisitions across the country. Reach out to our acquisitions team (acquisitions@parkwaycorp.com) to discuss opportunities.

Philadelphia's Jewish Family and Children's Service recently honored Parkway's EVP & Chief Admin officer, Anna Z. Boni, for her service to the organization.  She was honored along with Parkway's long-time community partner Jane Golden, Executive Director of Mural Arts Philadelphia.  We are proud to share a community and a company with these two great leaders.

Follow the links below for news coverage of the event:

Philadelphia is on a roll!!

We may not realize it, but our town has had major wins and the future is looking bright.

Shaking off the fatigue and cobwebs of 2 straight years of pandemics, protests, weather events, and starts/stops for our economy, it is important to step back and take stock of where our city is. You will start to feel differently about Philadelphia and our surrounding counties.

Business and jobs - Philadelphia is on the investment map! We have never before experienced multiple commitments to game-changing projects like:

Altogether, it equals approximately $10 billion in new investment in our local economy and tens of thousands of great new jobs!

Great place to live - emerging from the pandemic Philadelphia’s booming residential real estate has done well with high occupancy and strong rental rate recovery. Council’s changes to the 10-year tax abatement caused a huge surge in new permitted units, which will be key to encouraging additional college graduates to stay or move here. Our city is known for its great location, world-class restaurants, fantastic attractions, and reasonable cost of living. The additional first-rate apartments and townhouses will encourage an even greater influx of new residents.

Retail/entertainment/history – Our tourism and convention businesses are strong and growing rapidly. We are one of the few cities that has all 4 major sports teams. Speaking with broker friends, I’m also hearing very positive news about exciting new tenants for the empty storefronts in the city.

Taxation/government policy –Philadelphia and Pennsylvania are in a great position to continue to reform taxes and policies to encourage even more businesses to start and grow here. Both our residents and businesses deserve the opportunity to continue to thrive and support each other.

There is a fresh spirit of renewal and growth in our great city and region.  That spirit is backed by record levels of investment and development in our community.

So, fellow Philadelphians, now that we can meet in person again, let’s be grateful and think positively as we build our future together - things are looking up!

February 1, 2022 - We are pleased to welcome David Dobkin as Parkway's new Managing Director and Head of Acquisitions. Prior to joining Parkway, David served as Director of Investments at HK Organization, a privately held real estate investment and development firm in the New York metropolitan area. He was involved with all aspects of business operations, including acquisitions, fundraising, investor relations, financing, business plan execution, and asset management of a two million square foot portfolio of multi-family, mixed-use, office, retail, and industrial properties. Prior to that, he worked at Leitner Group, where he appraised more than 250 properties worth in excess of $2 billion in the New York City metropolitan area across all asset types. 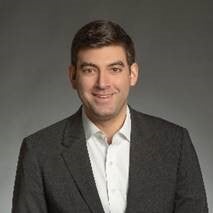 He received a Bachelor’s in Urban Studies and a Master’s in City Planning from the University of Pennsylvania.  The company is excited to welcome David and his expertise to the team.

October 25, 2021 - Parkway Corporation announces the promotion of Brian Berson to President of Parkway Commercial Properties, Inc. He joined Parkway Corporation in 2018, and since that time had served as Senior Vice President of Real Estate and Development, where he had overseen Parkway’s national office, residential, hospitality and retail portfolio. Within his new role, Berson will further expand Parkway’s real estate strategy and capabilities. 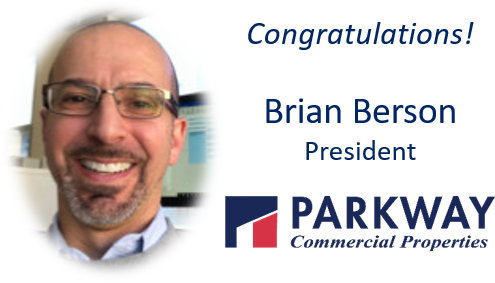 “Brian has made a tremendous positive impact on Parkway since joining in August of 2018,” Robert Zuritsky, President and CEO of Parkway Corporation said. “Brian’s focus, high-level of professionalism, deal-making ability and stellar reputation in the real estate industry is taking Parkway’s real estate business to the next level.”

Over the last three years, Berson has led a talented Real Estate Department that has achieved the following accomplishments:

“For three years, it has been my privilege to work within an organization that is dedicated to urban renewal within cities across the country,” Berson said. “Parkway’s legacy spans more than 90 years, and in that time it has made tremendous contributions as a leading real estate developer. As the President of Parkway Commercial Properties, I look forward to building upon that success as we look toward a bright and exciting future.”

Berson has 25 years of experience in the industry and has developed nearly two billion dollars’ worth of real estate. His previous experience also includes development positions in Washington, DC at LCOR, where he served as development manager for the 2.4 million square foot United States Patent and Trademark Office. He also served as construction manager for the Gannet/USA TODAY Headquarters while working with Hines Development. Berson received his Master of Architecture from Columbia University and his Bachelor of Arts from Washington University.

September 20, 2021 - Parkway, in partnership with Mural Arts, is proud to sponsor the installation of "Declaration" on the west side of our headquarters at Broad & Race Streets in Philadelphia.  The mural is part of a series of works by Titus Kaphar and Reginald Dwayne Betts and deals with themes of justice and representation in our systems.

Parkway's commitment to meaningful, impactful community art has now expanded to over a dozen major murals and sculptures in the city.  This mural is displayed on the Carlisle Street side of our building, facing 15th Street.

August 14, 2021 – Parkway is excited to announce the upcoming dedication of Contrafuerte in September 2021. Miguel Horn's sculpture will formally join Philadelphia's collection of public art and will be on permanent exhibit on Cuthbert Street between 12th & 13th starting soon!

For more about the sculpture and the artist, check out this article.